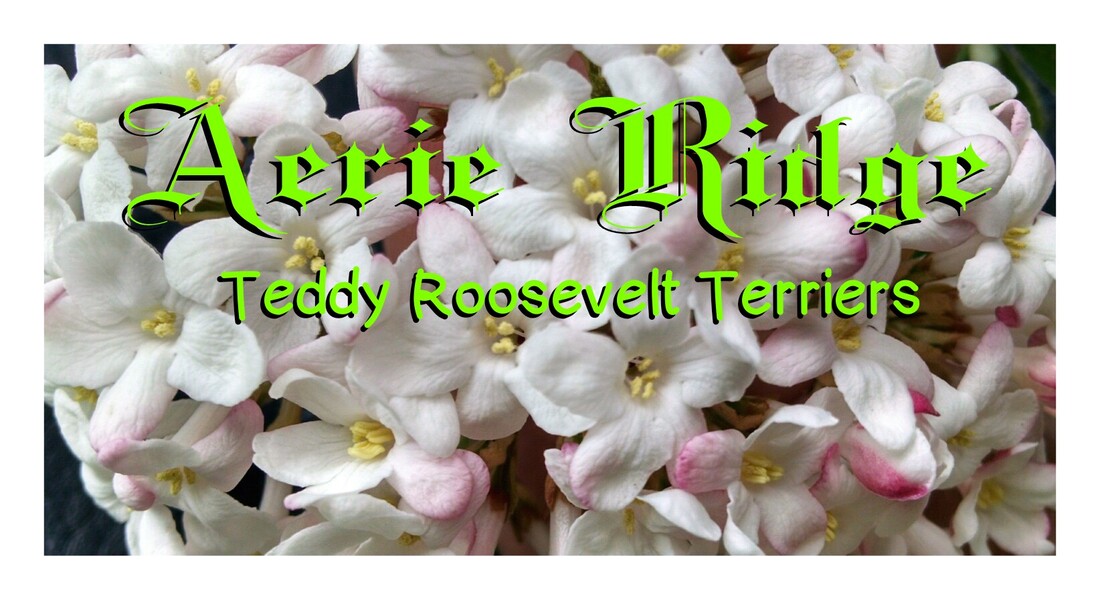 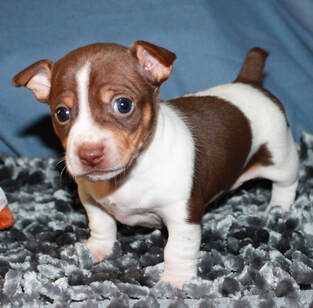 Our puppies are raised on our fifty acre farm, in our home.
​We do genetic health testing as well as OFA Certified Cardiac & Patellas.
Our adult dogs do the work they are bred for and work in a pack to hunt rabbit, squirrel, ground hogs, mice & rats.
We also do extensive Conformation Showing to prove their bodies are as sound as their minds. We pay special attention to temperament in order to retain the individual bonding, playful sweetness, and the 'off switch' Teddy's are known for. We strive to match our puppies temperament to the right home for them, so expect lots of questions!
Our puppies come litter box/pad trained. With their first shot and appropriate deworming done. We send them home with a 'Starter Kit', all health papers, and our recommendations for their care.
We do hold papers until proof of spay/neuter on our 'Pet' puppies. We also have a 'Return to Me' clause.
We welcome good breeders, but have higher expectations from you...we expect you to prove worthy of the daunting task of Breed Preservation. ​
​ 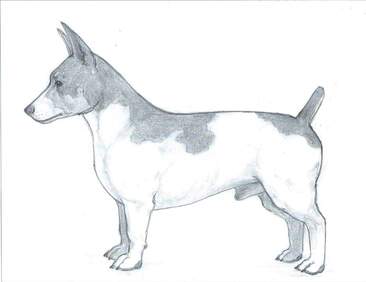 Breed Standard of the Teddy Roosevelt Terrier - AKC
July 3, 2019
History: The Teddy Roosevelt Terrier is a small-sized American hunting terrier. While they are lower-set with shorter legs, more muscular, and have heavier bone density than their cousin, the American Rat Terrier, they share a common early history. Descended from the terriers brought over to the United States by English miners and other working-class immigrants, their ancestors probably included the old English Black and Tan, the Smooth-Coated Fox Terrier, the Standard Manchester, the Old Bull Terrier, the now extinct English White Terrier, the Wry-Legged Terrier, and the American Bench-Legged Feist. Other possible dogs which may be in the ancestry are the Turnspit, the Beagle, and the Italian Greyhound or Whippet.

Teddies haven't always been known by their Presidential name; they have been called the "Type B” Rat Terrier, the Short-legged Rat Terrier or the Bench-Legged Feist in years past. It wasn’t until 1999 that they became known as the Teddy Roosevelt Terrier in honor of the much-loved 26th President of the United States. He was an avid Hunter, Sportsman and Preservationist, and his affinity for his family's hunting feist, which rid the White House of vermin, caused him to coin the name Rat Terrier and drew attention to the usefulness of these tenacious hunters.

General Appearance: The Teddy Roosevelt Terrier is a low-set rectangular shaped small hunting terrier; strongly built, giving the appearance of agility and balance. Originally bred for ratting and farm work, this multipurpose companion is capable of hunting rodents and vermin above or below ground and treeing small game but is not a spanned breed. This is a working terrier and must have the agility, speed, and strength to do the work for which he was developed. They are a slow maturing breed, not reaching full maturity until 2 to 3 years of age. They are a devoted companion but can be reserved with strangers.

Size Proportion, Substance: Size - At least 8 inches, not to exceed 14 inches. A properly proportioned Teddy Roosevelt Terrier is longer than tall with an approximate height to length ratio of 7:10, exhibiting an overall balance front to rear. Height is measured vertically from the ground to the highest point of the shoulder blade and length measured vertically from the point of the shoulder to the point of the buttocks. Substance - Substantial bone for a small breed; not course or fine. A well muscled dog, shown in good physical working condition.

Head: The head is proportionate to the size of the body. The expression should be kind and intelligent yet lively and alert. The eyes are oval in shape, somewhat small and set obliquely. Eye color ranges from light to dark and corresponds with coat color. Disqualification - Wall eye. The ears are V-shaped and set at the outside edges of the skull. Ears are carried erect, semi-erect, tipped or button, without preference but should be matching in carriage. Non-matching ear carriage should be penalized to the degree of variation but ear carriage in dogs under one year of age should not be penalized. Disqualification - Hanging or cropped ears. The skull is broad, slightly domed and tapers slightly toward the muzzle. The stop is moderate but distinct. The muzzle is filled-out under the eyes, chiseled and tapers slightly from stop to the nose, without appearing snipey. When viewed from the side, the muzzle and skull should be of equal length. The nose is self-colored, corresponding with the body color and is completely pigmented. The lips are clean, dry and tight, without flaws; fully pigmented and matches nose color. The jaws are powerful with well-muscled cheeks, hinged well back. Scissor bite is preferred. Teeth are well developed, strong and evenly spaced. Whiskers must not be trimmed or removed. Honorable scars or broken/missing teeth resulting from field work are not to be penalized.

Neck, Topline, Body: The neck is clean, moderately long, slightly arched, tapering slightly from the shoulders to the head and is well set. The line of the back is strong and level. The loin is short, slightly arched and muscular. The croup is slightly sloping with the tail set on at the end of the croup. The tail may be docked, natural bobtail or natural full tail without preference. The natural tail is thick at the base and tapers toward the tip. Tail carriage is dependent upon attitude, from an upward curve to straight out behind. Viewed from the front, the chest between the forelegs is well filled in on either side of a prominent sternum and is of moderate width with a pronounced forechest. The ribs extend well back and are well sprung, forming a broad, strong back, then curving down and inward to form a deep body. The brisket extends to just below the elbow. The underline of the rib cage curves gradually into a waist.

Forequarters: Forechest should be well developed with a pronounced sternum. Shoulders should be strong and muscular but without heaviness; length of the Shoulder Blade is slightly longer than the upper arm. Elbows are close to the body, being neither loose nor tied and falling directly beneath the highest point of the shoulder blade. The forearms are short, slightly curved and well boned; forearms do not appear straight, the distance between the wrists is slightly narrower than the distance between the elbows; toes point forward. Pasterns are strong, short and nearly vertical. Leg length from elbow to ground is approximately one third the height from withers to ground. The feet are compact, oval in shape, turning neither in nor out; pads are thick with strong nails. The front dewclaws may be removed.

Hindquarters: Hindquarters are strong and flexible with well muscled thighs; the length of the upper thigh is somewhat longer than the lower thigh. The hindquarters and forequarters are in balance. Stifles are well bent and hocks are well let down. Pasterns are short, strong and perpendicular to the ground; when viewed from the rear are parallel. Rear declaws are removed. The feet are compact, similar in shape and slightly smaller than the front; the two middle toes longer than outer toes, toes neither turn in or out; thick pads and strong nails.

Coat: The coat is short, dense, medium-hard to smooth, with sheen. Whiskers must not be trimmed or removed. Disqualification - Wire, broken coat, long coat, hairlessness, or any suggestion of kink or curl.

Color: Any bi-color or tri-color, without preference, but must always have some white, which may be of any size and located anywhere on the dog. Ticking in any white portion is acceptable as long as white is predominant. Disqualification - Merle pattern or absence of white.

Gait: A lively, effortless ground covering trot that displays an air of agility and power. Forelegs reach well and extend forward without too much lift and in unison with the strong driving power of the rear quarters. The front legs do not move in exact parallels but incline slightly inward to compensate for the shortness of leg and width of chest. Viewed from any position, legs turn neither in nor out, nor do feet cross or interfere with each other. As speed increases, feet converge toward the centerline, but do not single-track.

Temperament: The Teddy Roosevelt Terrier is kind and intelligent, yet lively and alert; easily trained without heavy hand. This affectionate, intuitive breed has a strong protective nature and well-developed pack instincts and will vocally announce the presence of any strange animal or human. This non-sparring breed is generally inquisitive of new dogs without being belligerent. He thrives on human companionship and will enthusiastically share any activity with his owner but can be reserved with strangers; submissiveness is not a fault. His class clown mentality and eagerness to please make this long-lived terrier an amazing companion.

Faults: Any departure from the foregoing points shall be considered a fault and the seriousness of the fault shall be in exact proportion to its degree; any fault that interferes with the health and welfare of the dog or his ability to perform his traditional work should be faulted to a higher degree.

Disqualifications:
Hanging or cropped ears.
Wall eye.
Wire, broken or long coat, hairlessness or any suggestion of kink or curl.
Merle pattern or absence of white.
Note: Merle is permitted in AKC as an alternative color and has full registration rights, it just may not be shown in the conformation ring. However it may be shown in performance events.